Nicole spent more than a decade in the U.S. Army. Throughout deployments to Guantanamo Bay, Iraq, Afghanistan, and Africa, she never really expected to be in danger because she worked in human resources and finance. “When you deploy, you think, ‘Oh, I have a desk job. I don’t have to worry about all this stuff,’” she explains.

A few years into her Army service, Nicole found herself divorced and a single mother. She continued to serve, but it was tough leaving her toddler daughter, Amina, with relatives while she was deployed overseas. Over time, the separation wore on Nicole. By the time she was deployed to a new post in Afghanistan, Nicole hadn’t seen or spoken with her daughter for six months. It was the longest they had ever been apart, but Amina was never far from her mind.

Nicole recalls her challenges worsening following a specific, traumatic event that occurred when she was assigned to escort a group of bankers to replenish an ATM. Before she reached them, three suicide bombers attacked along her path.

“The explosion actually made my ears bleed,” she says. “You could see body parts everywhere.” But even then, Amina was on her mind. “I thought that we could possibly die, and I wouldn’t see my little girl again. That was the scary part.” 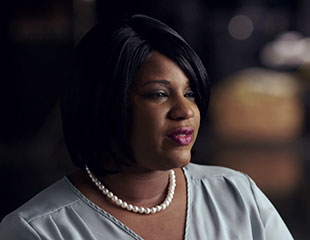 When Nicole returned to the U.S. and was required to have a mental health evaluation, she was diagnosed with PTSD and adjustment disorder. “That was really hard for me, and especially explaining it to my family, because my grandma’s old school. You know, she really didn’t believe in that sort of thing. She’s like, ‘Oh, you’ll be fine.’ You know, ‘Shake it off.’”

But, as Nicole learned, “this isn’t something you can shake off.”

She spoke about her feelings with her commander, her chaplain friend, and finally with mental health providers. As she recalls, “I realized that I was struggling when I actually had thoughts of killing myself. That's how miserable I was.”

Nicole visited her psychiatrist once or twice a week to vent her feelings and work through her challenges, including hypervigilance: “I noticed when I came back that I’m not really fond of large crowds of people,” she says. “I have to know where the exits are at all times. I don’t like my back facing the door.”

After leaving the military, Nicole also developed new hobbies that she found therapeutic, like crafting, writing, and painting. And she found peace of mind in spending time with Amina as she grew up, taking her to the park or teaching her new things, like riding a bike.

Today, if Nicole ever needs support, she has a doctor nearby who can help. “Whether you think you have an issue or not, go see someone,” she says. “If nothing’s wrong with you, that’s totally fine, but some people don’t do that and they end up hurting themselves or someone else when it could have been prevented.”

“Seek help,” she adds. “There’s no shame in it. It just shows that you’re strong enough to face what you’re dealing with, and you don’t have to do it alone.”