Saving a Life With Strength and Love

Saving a Life With Strength and Love

Read Stories > Saving a Life With Strength and Love

Nick and Felicia met after he returned from his first deployment to Iraq and about a week before he left for another state to complete training for a second tour in Iraq as an Army infantryman. “At first it was fine because him and I were getting to know each other,” Felicia says. “And so, when he left, it was kind of exciting for me and kind of exciting to know that we are … embarking on a new adventure together.”

For Nick, though, that time between deployments was challenging. He was still reeling from his first tour. “My first two weeks in Iraq, I was blown up twice. My vehicle was directly hit with an IED,” he explains. Less than a month later, he was hit by an “explosively formed penetrator,” or EFP — a type of IED designed to pierce steel-armored vehicles, disable them, and kill or injure the occupants. The bomb took the life of Nick’s close friend and military mentor, and he was still grieving.

Nick was in what he calls his “dark days” when he met Felicia online, but the pair later married during his midtour leave. 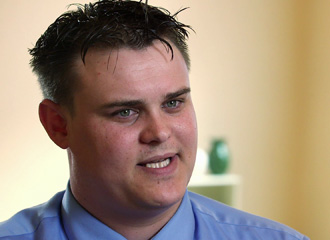 Support to get past dark days and enjoy life

“Things kind of changed once we got married,” Felicia says. “Initially, it was kind of nice to get to know each other away from each other, but then it was pretty hard once he came back — trying to not only learn to live with each other but to also learn to deal with his PTSD and his deployment issues.”

When the couple’s son was born and Nick was deployed, Felicia moved in with her mother for hands-on support. But when Nick returned, that once-helpful living arrangement heightened the infantryman’s stress as he transitioned out of the military.

“We were newlyweds essentially all over again, living with my mom and my stepdad,” Felicia says. “And that was hard because he was not only trying to come down from his Iraq experience, but he was also trying to live with his newlywed wife in her parents’ home.”

Nick recalls his emotional spiral: “I wasn’t at the top of my game at work. I was slacking off. I was starting to not care. I was coming in late, blowing everything off. Nobody’s opinions mattered to me. I didn’t know how to ask for help. I never wanted help. I’d drown everything in alcohol. I was drinking about three fifths of vodka a day, every day, for a year.”

Obviously, that made life tough for Felicia, too. “Nick had a lot of dark days,” she says. “He would just stare into the TV and not pay attention to anything around him. And a lot of really quick anger, a lot of quick emotions, so we would have a normal conversation and all of a sudden a normal conversation is turned into screaming and yelling and ‘I want a divorce.’”

Nick attempted suicide twice, drove while drunk, behaved recklessly, and, in his own words, basically “lost it.” “That’s when my wife decided it was time for me to either get help or she was going to go. She kind of gave me that ultimatum, and that was what drove me to get better. It was because I wanted to be a good father to my son and I wanted to be there, but at the same time I didn’t. I just wanted the pain to go away.”

Felicia started seeing a counselor — a military wife and mother who gave Felicia reassurance and perspective. “She’d calm me down and say, ‘It’s not you.’ And so that was the biggest thing … understanding that his anger, his rage, his depression, his lack of talking-ness, and his moodiness had nothing to do with me.”

Felicia drew strength and motivation from wanting to be a happy person with a happy family, and she had Nick admitted to an inpatient mental health treatment center. “It takes a lot of strength to look somebody in the eye that you love and say, ‘You do this, or I’m gone,’” Felicia says. “I think, even for our Soldiers, we have to be stronger than them sometimes.”

Nick says Felicia saved his life: “I stayed in there, did what I had to do, worked through my issues, and started to realize that life gets easier the more that I let things off my chest. It was a night and day difference for me.”

Through professional counseling and friendships with other Veterans, Nick and Felicia have learned to communicate their wants, needs, and difficulties. Nick has stopped focusing on the negative aspects of life, and that has opened the door for experiencing joy.

“Our son and Nick, they get along so much better,” Felicia adds. “I mean, the joy that they bring each other is beautiful. You couldn’t even imagine it. The way that my son looks up to him, knowing that he is not only a Soldier but also a great dad — you can’t even touch it.”