Seeing the Signs of Bipolar Disorder

Seeing the Signs of Bipolar Disorder

There were times when Jessie just couldn’t slow down.

“I’d be up. I’d be talking a mile a minute,” the U.S. Navy Veteran remembers. “My brain was just constantly going. Then there would be days when I couldn’t even get out of bed.”

The extreme swings in energy levels and moods are common signs of bipolar disorder. So, too, were the nights on end during Jessie’s time in the Navy when she wouldn’t sleep at all. She was diagnosed after she left the service and sought help with VA.

“I’m not sure about everybody else,” she says, “but when they diagnosed me with bipolar, I kind of was relieved: I’m not making this up in my head. Because that was a big fear of mine.”

Bipolar disorder affects an estimated 45 million people around the world, according to the World Health Organization. The condition can cause drastic changes in a person’s usual behaviors, moods, or energy levels. The high and low periods can last for hours, days, weeks, or even months.

“My bipolar is somewhat unique, in that I’ve had very few depressive situations,” says Donald, a U.S. Coast Guard Veteran who has managed his symptoms after receiving medication through VA. “Mine has been on the mania side. And you get an alternate reality. You think that things are happening that aren’t happening.

“It’s a stress-related disorder. And any stress, especially severe stress, can trigger [it].”

So, what does bipolar disorder feel like? The “up” swings, also known as “manic” episodes, can make a person feel extremely happy and energetic or on edge and irritable. Other symptoms may include: 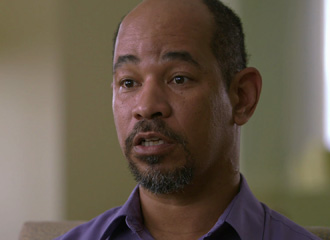 The “down” swings can leave a person feeling depressed or hopeless, often losing interest in things they usually enjoy. People with bipolar disorder also report:

During manic times, Craig, a U.S. Army Veteran, remembers “catching those racing thoughts and using them in a useful way” in his work as a labor organizer. But that didn’t last.

“And that’s when I started getting mental help.”

If you or a loved one shows signs of bipolar disorder, VA can provide a diagnosis and several effective treatments to manage the symptoms. Many Veterans have been treated for bipolar disorder with great results through medication, counseling, or other support that VA provides.

Learn more about managing the symptoms of bipolar disorder.

Some people with bipolar disorder may have thoughts of harming themselves or wish they were dead. These thoughts are very serious and need immediate attention.