When Stephen returned home from serving as a Patriot missile system operator and system mechanic in the U.S. Army, he began having recurring nightmares that he couldn’t shake. His nightmares and other ongoing PTSD symptoms affected his marriage and daily life — and then led to patterns of reckless behavior, drug use, and isolation. Stephen finally went to a VA facility, where he embarked on a new path forward, surrounded with friends for support, equipped with tools to help control his symptoms, and fulfilled by new hobbies that gave him a sense of purpose. 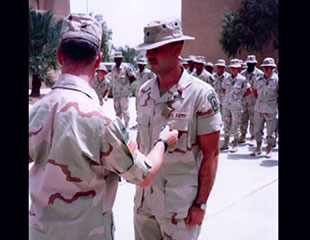 I started to feel like I wasn’t so alone

Stephen had served in the first Gulf War and then returned for a second deployment. One night, he was sitting at his outpost, when suddenly an enemy soldier began shooting at him. He dove to the ground, and the shooter was captured, but the traumatic experience left a deep impression.

Stephen didn’t immediately recognize the toll that his experiences in combat had taken on his mental health. But once he returned from deployment, he spent his nights reliving the trauma of combat — and his days mired in feelings of depression, anxiety, and anger.

Since Stephen’s traumas occurred at night, he tried to stay awake and keep watch. “I was here in the United States, but I felt like I was back at war,” he recalls. “I was living extremely dangerously, on the edge, where I would hope I would die — like the way I drove or I would ride a motorcycle at 125 miles an hour. I would isolate; I would cry; I would sleep for days; I would be up for days.”

Stephen began using illegal drugs in hopes that it would mask his symptoms, dispel his suicidal ideations, and overcome his tendency to isolate himself. None of it worked, and in the end, his drug use cost him his marriage and left him more isolated than ever. His unhealthy behaviors even ran him afoul of the law, resulting in his arrest and probation.

Eventually, Stephen sought help at a VA facility, where he opened up about everything he was experiencing. “As I got to meet other Vets with PTSD, I realized that we had similar faults, similar traits. We view the same things, and I started to feel like I wasn’t so alone,” he says. “Eventually I found some really, really excellent people that helped me deep inside — helped me with my nightmares, helped me with my anger episodes, my depression, my anxiety.”

After having a positive experience at the VA facility, Stephen was inspired to try additional VA programs and to engage more with his fellow Veterans. His recovery program came to include cognitive processing therapy and a variety of recreational therapies and activities, such as yoga and playing guitar in a music ensemble.

“VA is like this seed,” Stephen says. “And once you get that seed in your heart, it just starts sprouting.”