Marcus was so drawn to the military that he joined the Marines, fresh out of high school, when he was just 17 years old. But his enthusiasm for military service wasn’t shared by his community at first.

“Within the Native American culture, I believe that — or actually see that — not a lot of them give the initial support to being in the military,” Marcus explains. “A lot of that might come from the pass down of historic events that Native Americans and the U.S. government have had in the past. So, to be a part of the Marine Corps in this day and age was definitely a big step for my family.” Marcus served for eight years, including three deployments to Iraq, reenlistment, and service in Korea. But it was his last deployment, to Afghanistan, that changed his life immeasurably.

“On October 9th in 2010, I stepped on a 25-pound pressure-plated IED,” Marcus recalls. “That resulted in the loss of my left leg above the knee. My life in every aspect had to be adapted. Now, I was no longer physically healthy. I was an amputee.” 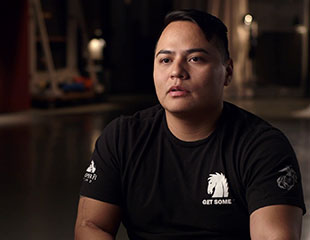 A combat Veteran overcomes many challenges after an IED blast

Before his injury, Marcus says he thought depression was a weakness of character or an inability to handle trauma, “and then I went through a depression and I could not help what my body was doing.” He asked mental health professionals for help with sorting out his emotions and improving his daily life.

“It was difficult, because I had never gone through therapy. I didn’t know exactly what it was we were supposed to talk about,” Marcus says. He worked through the sky-high level of stress and trauma that stayed with him after he left military service. “It was almost like a full-time second job trying to go back and not necessarily undo what happened to myself, but to try to just put it in a different perspective that, you know, I wasn’t going to be able to change anything, but I could live with it.”

During his active duty service, Marcus had refused to acknowledge that he was affected by the pressure he was experiencing. He misused alcohol in an attempt to cope with the trauma of serving in combat zones. That created some unique issues for Marcus due to certain negative stereotypes of his cultural heritage.

“There was sort of this taboo mindset that Native Americans couldn’t handle alcohol. There was a lot of people who would joke with me about it,” he says. “But I think there were a lot of things that I wasn’t being taught how to deal with internally — about my experiences in the Marine Corps and a lot of the deployments that I had done. Drinking sort of was just like an outlet for me that became too much of an outlet.”

When his drinking started interfering with his relationships, Marcus sought help for that, too. “Those programs were put in place to try to catch people before they got to the point where they can’t take back some of the mistakes that they would make,” he says. “I don’t push that on people like it’s something they need to do, but it’s a good resource. It’s a good outlet.”

Marcus says he continues to progress in his recovery and returns to VA for “tuneups” or “realignments” when he needs them. “All the stuff that I was given before — through mental health, through substance abuse programs, through marital counseling — it had meaning. It had purpose in my life,” he adds. From all of his experiences, good and bad, Marcus has learned how to improve his home life, work life, and relationships with his family and friends. “All of those experiences help you just become better at those things.”