Read Stories > Living in the Present Can Create a Better Future

Brian spent years moving from place to place, trying to stay one step ahead of his painful memories. Ultimately, the U.S. Army Veteran stopped avoiding his past and learned to be present.

Brian’s journey started in 1987, when he became a Commissioned Officer in the U.S. Army through the ROTC at Virginia State University. His first of two decades in the military included serving in Desert Storm, where he had experiences that haunted him for many years afterward.

“Those traumas, those stressors that I received during that time started affecting me later on in life,” Brian explains. He had trouble transitioning back into civilian life, feeling that nobody understood (or even could understand) what he had experienced. So he isolated himself, never staying in the same place very long. Brian’s unstable lifestyle and self-isolation affected his relationships. 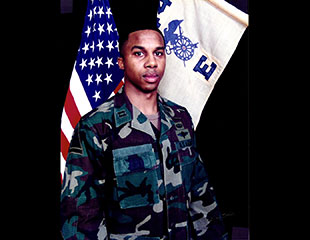 Hundreds of people out there are willing to help

“I was always wanting to move around. I wasn’t with my family a lot. I kind of went on jobs that took me away from home,” Brian recalls. He wonders if that behavior stemmed from the frequent transfers among duty stations he had endured.

“My marriage was failing, my children were getting older, and I still was having these issues of not wanting to be in one place,” he says. “I couldn’t keep transferring my family from place to place, so I was just doing it on my own, which was allowing my family to suffer at that point.”

“They noticed it,” Brian adds. “They started questioning it. My mom also questioned it.”

That’s when Brian met with a counselor at VA.

“After meeting this person for three or four times, I started confiding … stuff that was going on, and that’s when we started basically getting deep down inside of what was going on with me,” Brian says. At VA, he also learned meditation and mindfulness practices, which, along with therapy, helped him manage his PTSD symptoms.

VA professionals also encouraged Brian to take advantage of education programs for Veterans. He found his niche studying social work — specifically aiming “to help Veterans who might have gone through some of the stuff that I’ve gone through.” His personal experiences in the military and afterward have given him insight into their challenges and an “in” that fosters rapport.

“When they find out that I’m a Veteran, they immediately start opening up and talking — because Veterans, men or women, will kind of open up more when they know that you’ve gone through some of the same things that they might have gone through or speak the same language that they speak,” Brian explains.

His family has also benefited from Brian’s success through treatment.

“The great thing for my kids, No. 1, is that I’m stationary. I’m here,” Brian says. “And they do say that they’ve noticed that my demeanor, you know, is a little more open. I’m not as confined. … I’m always willing to call them. They find that I’m a little more stable, and they like that.”

Brian encourages Veterans to help each other and to lean on each other for support, because nobody understands Veterans as well as other Veterans.

“There’s hundreds of Veterans out there that are willing to kind of take someone and talk to them for a little bit and become a mentor. Don’t be ashamed about getting help,” Brian says. “You may not be able to get the help from your family members, so you gotta seek out other Veterans in order to find out what avenues you have to go through to try to get help.”