Daniel served in the U.S. Army’s 82nd Airborne Division, which he describes as a “pretty prestige, hardcore, badass job.” But after his best friend died by suicide, Daniel started to spiral downhill, attempting to self-medicate with drugs and alcohol to overcome the loss.

Several years later, Daniel’s life changed when his brother-in-law died from mixing alcohol with prescription medication for PTSD. “That was like an eye-opener for me, because I was doing that same thing,” Daniel recalls. “I was taking meds that were being prescribed, and I was mixing them with anything and everything I could get my hands on.”

Daniel’s substance use had ripped a wide swath through his life. It affected his relationship with his wife, who kicked him out of the house multiple times. Daniel was arrested for a DUI with his 8-month-old child in the car. His teenage sons looked into changing their last name to distance themselves from Daniel and the harm he had caused.

“I was building my hole deeper and digging it deeper and deeper.” Daniel says there were times when “I chose sleeping in a VA parking lot or on a VA park bench [rather] than sleeping at home in a bed with my wife and kids.” 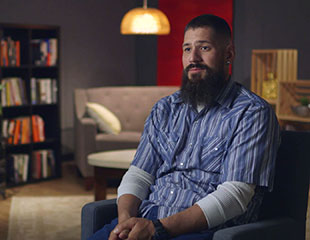 I got tired of fighting myself

Eventually, it became too much.

Daniel enrolled first in a VA anger management program, where a doctor suggested that he get involved with the Addictive Behavior Clinic (ABC) at his local VA medical center. “I put my whole self into it. … I started a whole different life,” Daniel says.

The program included counseling that allowed him to open up to his wife. “I was able to kind of tell her, really for the first time, what was going on — why I was upset or angry, or why I acted the way I did or said the things I did. I am very lucky that my wife has stayed behind me,” he adds.

Several years into his recovery, Daniel is excited to give back to his wife and be a better father to his kids. “When they come up to me and just put their arm around me … and say, ‘I love you, Dad,’ for no reason — it is just a total blessing to be a part of their lives now.”

On the two-year anniversary of Daniel’s sobriety, one of his sons asked for a picture of the two of them with the celebration cake. “He put it on all of his social media posts. That’s how proud he was of me.” That son will not have to experience the side of his father that’s out of control, Daniel says.

People who have known Daniel through the years have found inspiration in his recovery. “I have gotten people coming to me and telling me that they were seeking their own help now because they saw that if I could do it, then they definitely could do it,” he says.