When a 500-pound IED shattered Brandon’s spine, it also tore at his mental health. The U.S. Army infantryman who had served in Iraq and Afghanistan suddenly had to face living in a wheelchair and learning to walk again — this time with four vertebrae fused together.

Brandon was medically discharged from the Army about two years after the explosion. When he got home, the absence of structure, combined with trying to fit back into his old life as a changed person, made the transition tough. 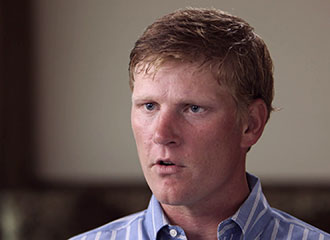 Deciding to get help ended the dark days

“You are kind of getting back to the routine of what your life used to be like,” Brandon says. “Any deployment you go on, you think everything back home goes on pause. Well, you know, as you come to find out, it doesn’t. Everything moves on.”

Brandon explains when he was on active duty, he was focused on the mission at hand. But after his military service, he had no distractions and was left focusing on himself. That’s when he started pushing people away.

It took a dramatic reaction from Brandon’s wife to help him see how he had changed. “One day, sitting on the porch with my wife, she kind of flipped out,” Brandon says. “She pretty much looked at me and said, ‘You’re not Brandon. You’re not … the man I married.’ And it really took me aback.”

Brandon realized he had to do something. At VA, he found therapy specifically for Veterans of Operation Enduring Freedom and Operation Iraqi Freedom. He was able to talk about what he was doing to himself, and he began to understand how his behavior was affecting the people around him. Brandon also called on the expertise of a pain management doctor who prescribes effective medications and other pain interventions.

“The day that I decided to go get help was the next step — the next chapter — in my life,” Brandon recalls. “It ended the dark days, and it began the life I have today, which is pretty amazing.”

Brandon is not alone. The Centers for Disease Control and Prevention estimates that 50 million Americans — about 1 in 5 — experience physical pain every day; among Veterans, it’s closer to 1 in 3. While Brandon recognizes that his route to healing may not be right for everyone, he encourages Veterans to find what works for them.

“What you need to do is find that niche; that’s all I can tell people,” Brandon says. No matter what Veterans need, “VA probably has a program or a way to connect you with a program that does that.”