When Mike, a U.S. Army Veteran, was seeking treatment for changes in his behavior, he became overwhelmed by all of the options. Eventually, “I was going to two, three appointments a day, five days a week,” he says. “I had to do speech therapy, vision therapy, physical therapy, [and] occupational therapy.”

Those types of proven therapies have helped many Veterans manage their mental health concerns, but Mike says it was hard for him to vocalize what he was going through. “I didn’t like it,” he recalls.

Then one day, Mike discovered art therapy, and everything changed.

“People think that it’s painting your feelings and playing with arts and crafts, but it’s deeper than that,” Mike explains. “You’re addressing pain and trauma.”

Coming from a military family, with a grandfather who served in World War II and a father who served in the Vietnam War, Mike wanted to follow in their footsteps. But after being injured in an attack near the Army base where he was stationed, he was evacuated from the base and transferred to Walter Reed National Military Medical Center. 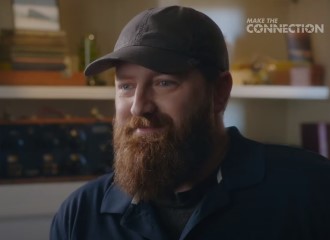 Finding a catalyst for recovery

“As soon as I got to Walter Reed, I went right into surgery,” Mike recalls. But the team there focused only on his physical health. When he was sent back home, his wife, Jacquelyn, began noticing changes in her husband.

“He was forgetting things, and he would get agitated very easily, and it felt like he was becoming more detached,” Jacquelyn remembers. “It was very stressful. It affected my own health, and eventually it affected his, too, because not dealing with stuff doesn't make problems go away.” Mike admitted that he didn’t know where to turn, and Jacquelyn encouraged him to speak with someone.

Mike entered the Warrior Transition Unit (WTU) program at Fort Belvoir, just miles from his home. It was the first time he had ever received behavioral health counseling or treatment, and he felt a bit overwhelmed. He was eventually diagnosed with a traumatic brain injury and PTSD, but it was through art therapy that he was able to address his behavior and advance his recovery.

“The therapists — they’re not just the arts and craft supervisors,” says Mike. “They’re behavioral health professionals trained to see and read what you put on the canvas.”

“I didn’t have to talk. If something was bothering me, I just had to figure out how to say it in paint,” Mike explains. “Once you realize that you have the ability to control your response over time, you become better at it. You can then channel that energy instead of being in a hypersensitive or hyperaware state all the time.”

Mike also began painting at home, which made the positive changes even more noticeable to his wife. “It was cool to see his passion ignite again,” Jacquelyn says. “After he had been in treatment for a while, I really started noticing that he was happier. It felt like a fresh start as a family.”

Like Mike, some Veterans don’t find a treatment program that clicks for them right away. But as his experience demonstrates, it’s important to explore all of the options available when seeking mental health treatment. “You seeking help is about yourself,” Mike says. While it’s also about the people who want the best for you, “[it’s] not for their sake –– but so that you'll be happy.”