From the start, Tina knew her son was a fighter. Drew was born three weeks late, after some 28 hours of labor, with his umbilical cord wrapped around his neck. As Tina recalls, “He bounced right back.”

That fighting spirit runs in the family.

Think of Tina, alone in Italy with a newborn after her husband, Dennis, was deployed with the Army. To talk with her parents back home, she would walk a mile and wait in a long line for a pay phone.

Or think of Dennis, pulling over to take a call from Drew, who had just landed in Afghanistan when his base came under attack. “I probably turned white as a ghost, because I knew what he was going through,” Dennis says. “I wanted him to get somewhere safe. … But I also believe I told him, ‘That’s the way it is in a war zone, son. That kind of stuff’s going to happen. So take care of yourself, and be safe, and be careful.’”

When Drew returned home from his deployment, Tina could see that he was fighting something else. As a marriage and family therapist, she had studied PTSD, and now she saw the signs in her son.

“If we went out to a restaurant, … he was constantly looking around and very stressed. So that I knew,” Tina says. “I just was adding up all of the symptoms and said, ‘Please get some help. You just really need to talk to somebody and try to seek some help.’” 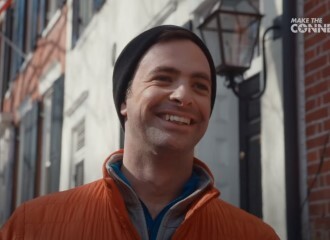 Dennis remembers the messages he’d exchanged with his son while Drew was deployed. They were tough discussions about fellow service members who had been injured or killed.

“He went into the Army as a carefree kind of guy,” Dennis says. “It was an adventure. And after he came out, it was not an adventure. … And his mother and I both talked, and we decided that he needed help, because he had seen a lot of things that he never expected to see in his life. … But we didn’t know how to approach him to get help for him.”

About a month after he left the service, it all came crashing down on Drew. He was watching a documentary about World War II, and suddenly, he couldn’t get the images of injured and fallen service members out of his head.

“It sent me for a tailspin,” he says. “I pushed everybody away. I pushed my wife at the time away. I stopped talking to my family, and I just retreated inside myself and tried just to focus on my work, my schoolwork. And I basically turned my apartment into a cave — just for me, and only me.”

But one day Drew woke up to the fact that he was all alone. “I had no family around anymore,” he says, “I had no friends. I had pushed my wife away. … I had basically completely numbed myself to everything.”

That led Drew to a Vet Center.

The psychologist he met with needed just moments to identify the stress, depression, and anxiety that he was dealing with. Drew eventually tried cognitive behavioral therapy, which he says “opened up all kinds of doors” by helping him confront his anxiety. It taught him to slow down, to think things through, and to approach challenges in bite-size pieces.

“[It’s] allowed me to be more open and honest with people,” Drew says. “I thought, previously, that the best thing for me to do would be to keep things inside and not tell people, because I didn’t want to burden people with my problems. And I realized, that actually pushes people way.”

In addition to the experiences and trauma Drew faced while serving, he also carried many resentments about his childhood, which led him to pull away from many people in his life, including his parents. Eventually, therapy helped lead him back to his family.

“I don’t want you to get too excited,” Tina remembers Drew telling her. “I’m only going to be here for a few hours. I’m going to say what I need to say. And then I’m going to leave.”

On the back deck of their home that day, Drew and Dennis had a pivotal conversation — one that changed the course of their relationship.

Dennis shared a realization he’d had: “I had been a real jerk in my life up to that minute, because I never thought I had been affected by anything.” That realization had changed his outlook. “I began to explain [to Drew] that I had problems — that I didn’t realize it. But once I did … I wished to apologize to him for whatever I had done to him to make him feel that I hadn’t been the father that he wanted me to be.”

“When he apologized, like, that was it,” Drew says. “It all just kind melted away from me, and it was like I had this huge burden come off my shoulders.”

In his father, Drew could now see someone else who had faced challenges. “Rebuilding my relationship with him has kind of reinforced the idea that I’m not alone — and that, all things being equal, there’s somebody else out there that has walked in the same shoes as me,” he says.

That moment helped them begin rebuilding their family. Last year, they had a big get-together for Christmas, with a trip to all see the new "Star Wars" movie. Drew and his mom now share talks about the counseling field. Drew and his dad share book recommendations. They enjoy walks with Drew’s dog, Molly, and just spending time together.

For Tina and Dennis, the impact of their son’s treatment was significant. “He was my son again,” Tina says. “He was loving. He was affectionate. He was caring, considerate, sympathetic. I mean, it was a blessing. It really was a blessing. I had my son back.”

Her son, the fighter.

“The advice I'd give to other Veterans with mental health challenges is: Don’t give up,” Drew says.

“Keep fighting. If you fight hard enough, you'll find somebody out there that will take your hand and help guide you to where you need to be. You have to be your own advocate. You have to fight for yourself, but just don't stop fighting. And eventually, you'll get where you need to be. And there’s plenty of people who’ve been in your shoes that want to help you get to a better place.”