Don recalls flying escort for a U.S. Army convoy and watching a Jeep explode after hitting a landmine. His group went in to recover a soldier who was critically injured.

“That flight with him laying there on the floor was …” Don pauses and shakes his head before continuing. “I’ll never forget it. That was the longest flight I’ve ever flown.”

Within weeks of returning home from Vietnam, Don got married, got a job, and got on with his civilian life. The Army Veteran blocked out the trauma he’d experienced. He set aside the memories of the people who were horribly injured in Vietnam — and the people who spat at him and other Vietnam Veterans when they returned to the States in their uniforms. For more than 30 years, Don stuffed down his pain and anguish. 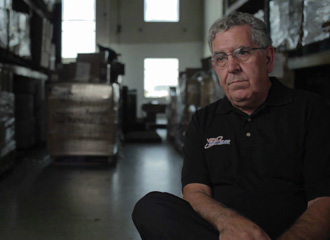 But Don learned that ignoring a problem doesn’t make it go away. In fact, it can make it worse.

“I didn’t want to remember anything. I didn’t even think about it,” he explains. “It didn’t hit me until 9/11, and I didn’t know it.” Something about the attack brought his trauma closer to the surface, and he inexplicably became angry, withdrawn, and depressed.

After several months, Don’s wife insisted that he see their family doctor. The doctor was adamant that he get help at VA, but Don didn’t embrace the idea right away. In fact, instead of getting help, he began drinking heavily. Sleep became difficult at best. Don’s nights were plagued with physical and emotional unrest. He would wake up drenched in sweat. His wife would sometimes tell him that he had gotten up in the night, but he had no memory of it.

Don was worried about going to any kind of therapy, but eventually he visited a VA therapist, whom he describes as “amazing.” Twice a week for the next two years, Don worked on his recovery with the therapist.

Don’s therapist taught him that some of his behaviors had been clues about the pain he was hiding. For example, he always sat with his back to the wall so he could constantly scan his surroundings, and he had trouble standing in lines because that made him feel vulnerable. Sudden loud noises left him scared and shaking, well beyond a normal startled response. His therapist explained that those behaviors were all methods of self-preservation; Don was mimicking some of his combat behavior in his civilian life.

Don also learned that he had PTSD and survivor’s guilt.

In Don’s first year of therapy, his wife saw a change in him. Medication helped with his depression and PTSD, while counseling gave him new ways to look at things. Don recognized that whatever he had done — whether he felt it was good or bad — was part of his life experience. Once he could accept himself, he was able to take pride in having served his country.

Don says he wouldn’t be here without his wife’s help, and he advises other Veterans to reach out for support.

“You can’t internalize this forever. If you do, it will eat you from the inside out,” he says. “You have to deal with it or it’s going to take you — and your loved ones deserve better.”