Gus was instilled with an appreciation for the armed forces at a young age.

“My dad served; my uncle served; both of my aunts served. It's a very military family, and so I wanted to enlist too.” Following in his family’s footsteps, Gus started his military career at West Point and went on to serve as an Army infantryman from 2004 to 2009.

Given his family background and years of training and service, Gus never expected to have difficulty transitioning back into civilian life. But after his time in the Army, he says his mental health issues became evident in three ways. “One way was anger. One way was just bouts of crying that came on out of nowhere — just being overwhelmed with emotion. And the third way was nightmares and just having a lot of trouble sleeping.”

This irritability was new not only for Gus, but also for the people in his life. “The anger manifested in real unhealthy ways,” he says. “I remember people would notice sometimes the anger come up, and I was a little bit too intense — a little bit too aggressive, and they would mention that.”

Gus wanted to get in control of his reactions, but even as he made strides to improve, any little reminder of his military experience triggered his emotions. Simply hearing a jet fly overhead, seeing an American flag waving in the wind, or passing by somebody in camouflage would make him very emotional and often lead him to self-isolate. 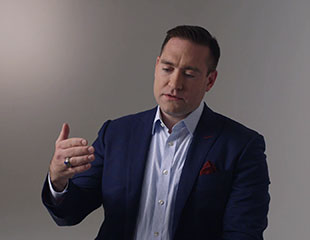 I realized I didn’t want to live like that

Gus experienced such triggers while he was both out in public and alone at home. “I just couldn’t sleep. I would sit in bed and, you know, my mind would just be racing,” he says. “And then when I would fall asleep, I would have nightmares.” His trouble sleeping added to the frustration he was already feeling from losing control over his emotions.

Gus had reached a tipping point. “I realized I didn’t want to live like that.”

He began seeing a psychologist at his local VA facility, where he explained what he was experiencing. That’s when his doctor recommended meditation. This was something that Gus had never experienced, and at first he found it to be challenging. But after working closely with his therapist, he grew much more skillful and was able to use it to his advantage.

“It’s helped me kind of just be calm. It gives you some distance. You can see the anger coming up, and you don’t have to act on it,” he says. “And then, if you think about it, and you watch it, it just goes away.” Meditation has helped Gus find a new perspective and allowed him to communicate better with those around him.

Now Gus is able to recognize oncoming feelings of anger and irritability and work to address them before his emotions reach a boiling point. “If I find myself having trouble sleeping or I’m having trouble, you know, I’m getting overwhelmed or I’m getting angry, what is almost always the case is, I haven’t meditated enough, I haven’t exercised enough, [or] I am drinking too much. And as soon as I do one of those, it helps.”

Mindfulness and introspection were the tools Gus needed to harness his impulses and instinctive reactions. Working with a therapist can help you identify a treatment plan, providing ways to cope with your emotions rather than letting them control you.

“If you’re not sleeping; if you’re feeling angry; if you’re getting overwhelmed with your emotions, then absolutely go to a Vet Center and talk to somebody, because it is so helpful.”