When Joseph was 10 years old, his schoolteacher gave him a lifelong gift: the love of science. Years later, that love inspired him to study robotics when he entered the U.S. Navy. After Joseph transitioned out of the military, the same teacher appeared in his life again with a new gift: healing.

The pair reconnected when Joseph sought support after an eight-year Navy career beset by tragedy and trauma. It started with his first command on an auxiliary oiler, where Joseph developed an intimate relationship with another sailor. It was his first same-sex encounter, and he knew they had to keep their relationship a secret or face social and professional consequences. But a shipmate saw the men together and harassed Joseph’s partner, who then attempted suicide. 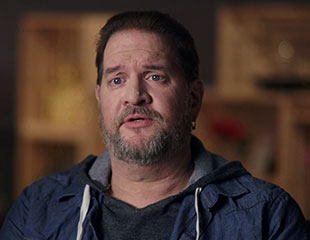 Now it’s time for me

“This is the man I swore to love and protect, and — without bringing attention to what we were doing or our relationship — I had to turn him in to save his life, or what I thought was going to save his life,” Joseph says. After his partner was removed from the ship, Joseph called to check on him, but it was too late. He had died by suicide.

“I was just numb — physically and mentally numb,” Joseph says. “I didn’t know what to do. I’d failed him, and that destroyed me.”

Joseph decided in that moment to assume a heterosexual lifestyle. He got married, his wife got pregnant, and Joseph was chosen for the Senior Enlisted Academy (SEA), a Naval leadership school. Then, he recalls, in a split second during his second tour in the Persian Gulf, “My career was over.”

“I was doing repairs on an ammunition elevator. They had had a full pallet of five-inch 54 ammunition.” The brake wasn’t set properly, and when the ship hit rough water, the elevator severed Joseph’s right foot. “Everything I had worked for, all of it, gone,” he says.

Soon after his accident, Joseph was informed that his son was born and his wife wanted to end their marriage. “I went into a frenzy,” he says. Dealing with a divorce, unable to find a job, and with limited mobility, Joseph says he made food his “drug of choice.” “That’s when I became my darkest. I was losing my mind. I had felt so alone and out of hope.”

Joseph was giving in to despair when he suddenly realized he didn’t want to give up and reached out for support. One of the people who reached back was the teacher who inspired him as a child.

The teacher had opened a holistic healing center for Veterans in 1986, the same year Joseph joined the Navy. Thanks to the care and camaraderie he experienced at the center, Joseph began to feel better and more confident. He started a business, earned a degree in computer information systems, and lost weight.

And he married “a wonderful husband who’s got my back,” Joseph says. “I am a new man. I have been transformed.”

Joseph has learned firsthand how much better life can be with support from people who care. “Anybody that’s sitting there ready to give up: Do something. Talk to a Vet. Call a buddy,” Joseph says. “There is somebody listening, and we are here to help.”