Whether therapy shifted their perspective, introduced them to a new coping tool, or allowed them to process old feelings, many Veterans have found that treatment can help them improve their lives in unexpected ways. During Mental Health Month and all year round, you can explore Veterans’ journeys and learn about the many ways their lives have changed.

Some Veterans develop expertise in a new activity that was originally suggested as part of their therapy. That’s what happened to Sarge. He had developed memory and sleep problems toward the end of his third tour with the U.S. Army in Vietnam. When he returned home, additional issues with recklessness, anger, and hypervigilance led Sarge to VA, where he was diagnosed with posttraumatic stress disorder (PTSD). At some point during his recovery, the former squad leader started filling notebooks with the thoughts that were too hard to say out loud. He then learned to turn his writing into blues songs, and now, his words and music help other combat Veterans.

Sarge says performing for his fellow Veterans “makes me feel like not a feeble, old 75-year-old man. … The most beautiful medicine that I ever got for PTSD is having an audience really like what I said. It’s just so healing.” Years after transitioning out of the Army, Sarge’s therapy turned into music, which became his fountain of youth, his passion, and his therapy all rolled into one. 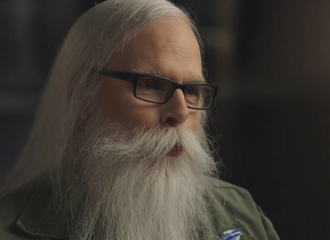 The Power of Poetry

For Bruno, unexpected change came when the forgiveness of one family led him to improve his own relationships. The U.S. Marine Corps machine gunner and combat instructor enlisted about three months before 9/11. While serving in Iraq, Bruno explains, “We were in a firefight where people were injured that were not supposed to be injured, and we were the cause of that.” A family that had been trying to leave Baghdad lost a father and three sons in that fight; only the mother and daughter survived.

“I didn’t know what to do with that for a really long time. I mean, I was only like 19 or 20 years old at this time, so it was just hard on me coming home,” Bruno says. He started drinking heavily and grew angry and aggressive.

Then Bruno learned that one of the men he served with had located the mother and daughter who survived the firefight. They made contact in a moment that changed his life. “I remember getting to the doorway of this little lady who was probably like 5 feet [tall], and she embraced us. I just went up to her and gave her a huge hug. We met the daughter who we shot through the shoulder. They cooked dinner for us. We talked. We laughed.”

Before those acts of kindness, Bruno says, “I didn’t treat my wife the way that she deserved to be treated.” But the Iraqi family’s grace, combined with VA’s treatment, helped Bruno refocus his priorities. “If they can move forward with their life, and embrace people that took so much away, and still love them — if they can do that, then I can too,” he says. “I think that’s part of why I do a lot of the things that I do now — because of that moment.”

Now Bruno’s family is the center of his life. “Being a good example, and being open for them to teach me, listening to them, doing everything that I do alongside them — that’s what it’s all about for me.”

Christina found a new, peaceful mindset in an unexpected place: trauma treatment. While serving in the U.S. Air Force, she experienced military sexual trauma that left her anxious, angry, and volatile. “When you’re in it, there’s no mental health. You’re in war,” she explains. But after being medically retired from the Air Force, Christina could no longer overlook her well-being. “I knew I was mentally falling into illness.” One important step in the healing process, she says, “is looking in the mirror and saying, ‘I’m worth it, and I’m going to find a way to get better.’”

Christina started with one-on-one therapy at VA and then explored other group therapies and programs, including cognitive behavior therapy, cognitive processing therapy, and dialectical behavior therapy. The treatment programs “were absolutely why I’m able to sit here today,” she says. “I got to understand what it looks like to have a victim mindset versus a victorious mindset.”

Tags: Transitioning From Service, Problems with Alcohol, Stress and Anxiety