Stephen had mostly worked at a desk job in the U.S. Army, but when he was deployed to the Middle East, he came under indirect fire while on patrol. After returning to the U.S. and transitioning out of the service, Stephen experienced sensory triggers and flashbacks. Sudden, loud noises instantly returned his mind to an attack he had experienced on base. Still, he didn’t think his symptoms were severe enough to seek mental health support from VA.

Like many Veterans, Stephen discounted his symptoms and trauma, partly because he thought other Veterans — like those who served in the infantry, the cavalry or special operations forces — had lived through worse experiences and were more deserving of VA care.

“A lot of times, I felt like I couldn’t have PTSD, because I didn’t go through what those guys went through,” he says. 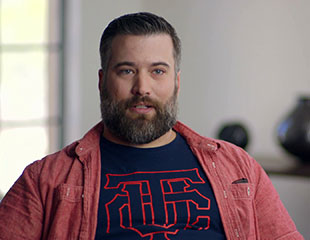 You just need to find some ways to move forward

After serving in the Army, Stephen settled in Arizona to attend college, which meant facing the challenges of adjusting to civilian life and student life at the same time. For some Veterans, the differences between things in civilian life — like college — and the military can be vast and difficult to adjust to.

Stephen looked to VA for assistance. “You have counselors who have gone through those things and have been to those places that you have. So I think that was the most positive side … just being able to sit across from somebody that’s lived it and have a conversation with them about how to constructively move on from that.”

Working with his VA care team, Stephen learned ways to manage his PTSD and reframe his life experiences, using his military training as a tool for succeeding in his next chapter as a college student. “You have to give yourself a new mission, and those hit times are now your classroom times, and those deliverables are now your homework assignments, and those consequences are you can fail.”

In addition, Stephen benefited from carrying a “touchstone” — a physical object with personal significance that can be touched for emotional comfort. It was also very helpful for him to speak openly with his professors about his history and mental health, alerting them that he might need to leave the classroom sometimes. “It’s OK to admit that you have some things that you need to work through,” he says.

For Stephen, the hard work has been worth it. “To me, the most beneficial experience I’ve had in my life other than the military is definitely college — getting out there, learning something new, bettering yourself and finding who you are through that process.” Today he leads a team of mentors who help Veterans transition from military service and into the student lifestyle.