After returning home from U.S. Army service, Hector dealt with a fear of crowded places, leaving home and being someplace that would be hard to escape. He had trouble navigating the world because many ordinary experiences would suddenly remind him of painful memories. Hector felt helpless.

“Everything in your world becomes a potential threat,” he says. “You’re paying attention to everything. You can scan, scan, scan, and everything is triggering something inside of you.”

Hector was experiencing sensory triggers, which are sounds, sights, smells or other sensations that call to mind a traumatic event and cause an intense emotional reaction. For Hector, certain scents vividly recalled incidents he witnessed while serving. 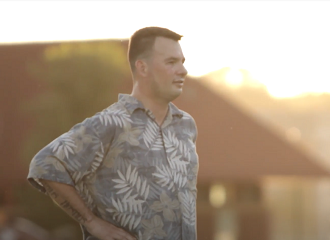 Ryan was triggered by sights, which made driving difficult once he returned home after Army service. “Traffic circles are bad,” he says. “It’s a 360-degree area for a bomb. You don’t go through traffic circles.”

While Jennet was serving in Iraq, her headquarters was blown up, and she vividly remembers the noise and chaos of the explosion. After returning home, she experienced new sensitivity to loud noises. She recalls feeling alone in her new reactions.

“Friends I had before, they didn’t understand. You don’t understand if it’s like the Fourth of July and you set off a firecracker that’s really loud, and I just go jetting down a street like for two blocks and everyone is laughing at me,” she says. “But, to me, it’s an explosion; it’s not just a firecracker.”

Like Hector and many other Veterans, Jennet had both mental and physical reactions to being in large crowds. For Jennet, the urges to cry and to flee a crowd were compounded by shaking and feelings of confusion, all of which left the Army combat Veteran feeling “terrible [and] inadequate.”

When Jennet learned that her triggers were in response to her past experiences and not happening out of the blue, she started taking her mental health seriously. She went to VA for help with processing and managing her reactions to sensory triggers. She started with group therapy but ultimately found that one-on-one counseling was better suited to her personality. “The therapy, I would say, has helped me,” she reflects. “It’s really nice to talk to someone who’s not trying to judge you or tell you just a quick fix, because there isn’t a quick fix. The VA, they actually helped.”

Ryan learned how to work through his sensory triggers with help from VA. Now he can navigate traffic circles without difficulty.

A combination of VA resources — including various therapies, such as cognitive processing therapy, prolonged exposure therapy and yoga — helped Ryan pursue his “new mission” as a massage therapist.

“It gave me a basic toolbox,” he says. “It gave me something to work with.”

Hector’s healing started when he admitted that he needed help. A severe flashback (related to his 13 Army, Reserve and National Guard deployments) resulted in an armed standoff with police and criminal charges. Hector recalls a lawyer telling him: “I’m willing to take your case, but I need to know which one you are. You’re either a person who needs help or you’re a criminal. Which are you?”

“He forced me to say I need help, and it was the hardest words that I ever had spit out,” Hector says. “I realized that I do need help and I [was] able to say it. It wasn’t easy. It hurt. But that was the point where it finally came together.”

Through therapy, Hector — who now works as a therapist himself — was able to change his mindset and realize that it’s not weak to ask for help.

“The Veteran has to have the courage to step forward,” Hector explains. “The warrior has to say, ‘I am courageous,’ and not let that stigma sit there and [say], ‘I’m a wimp because of this.’ No, you’re going to be a better person because of this.”

Tags: Transitioning From Service, Stress and Anxiety, Feeling on Edge