“I’d spent six weeks with a counselor, and throughout the time — every week that I saw him — he said, ‘I think you should go to group therapy.’ … Finally, I just gave in,” says Kelly, a Marine Corps Veteran. “It turned out to be the best decision that I had ever made.”

The group therapy she resisted for weeks was for women Veterans who had experienced trauma. While their experiences weren’t the same, Kelly — like many women Veterans — found that big-picture similarities can lead to powerful, therapeutic connections. 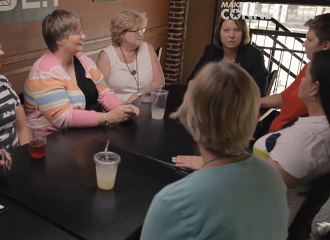 “I find really quickly that once you start talking to women Vets, our experiences are really similar,” says Trista, a Navy Veteran. “It’s all about talking, and it’s amazing what you can do by just telling and owning your own story.”

“Once you realize that it doesn’t matter what you’ve been through, you just kind of work through it — together,” Kelly says. Kelly, Trista, and two other women are featured in the video “Women Veterans: Support Works.”

Women make up the fastest-growing group of Veterans and face challenges that differ from those of their male counterparts, both during and after military service. As a group, they experience homelessness and military sexual trauma at much higher rates than male Veterans. In addition, women Veterans are at greater risk for suicide than non-Veteran women.

“We have to find groups that understand us because of everything we’ve been through,” explains Jennifer, a U.S. Navy Veteran. “So, it’s really nice to have that connection where they just get you.”

Kim, a 21-year Veteran of the U.S. Air Force, spent years in a state of postpartum depression that went undiagnosed. She found camaraderie, support, positive coping skills, and healing through a VA women’s group. Kim tells Veterans: “Go on out there and get that professional help. It’s the best thing that you could ever do.”